The Lo-tech 8-bit IDE Adapter is a bootable IDE controller for vintage PCs with only 8-bit ISA slots – basically PC/XT class hardware. The adapter is a development of the the Lo-tech ISA CompactFlash Adapter, adding an 8- to 16-bit MUX to make possible the use of normal hard drives, including current SATA drives (via an adapter like this). In this post, I’ll cover how the adapter works.

The main design goal with this adapter is to enable the use of standard, 16-bit drives (‘ATA drives’) with PC/XT class hardware. ATA drives all use both 8- and 16-bit data transfers:

Note that this applies specifically to hardware in 8-bit ISA slots; when a 16-bit instruction is used with a 16-bit device, all 16-bits are transferred in one bus cycle (and via a single, port 0 in this example). This difference provides both a problem and an opportunity – the ATA specification defines port 0 (only) for (the 16-bit) data transfer, so it just won’t work ‘as-is’ via an 8-bit slot, but secondly the CPU and BIU will already deal with one half of the equation. The 8-bit adapter just needs to break apart 16-bit drive IO into two ISA bus cycles, without the drive noticing.

Making ports 0 and 1 free for the ATA data register is straightforward – just shift all the command addresses left one bit, a trick already used in the XT-CF line of adapters. With the BIOS code similarly updated, it makes no difference to the drive and this then means address line A0, which distinguishes port 0 from port 1, is free for the adapter to use for something else.

With that in place, 8- or 16-bit port IO can be performed to any of the drives registers, though the ATA specification only calls for 16-bit IO on the data register.

The 8- to 16-bit MUX itself uses a separate 74HCT573 and 74HCT245 pair for reads and writes, and another 74HCT245 to link back to the PC data bus. The ‘573 is a latch (like a one-byte memory) providing temporary storage, and the ‘245’s are buffers that can be switched on at will, enabling isolation of certain signals when required. 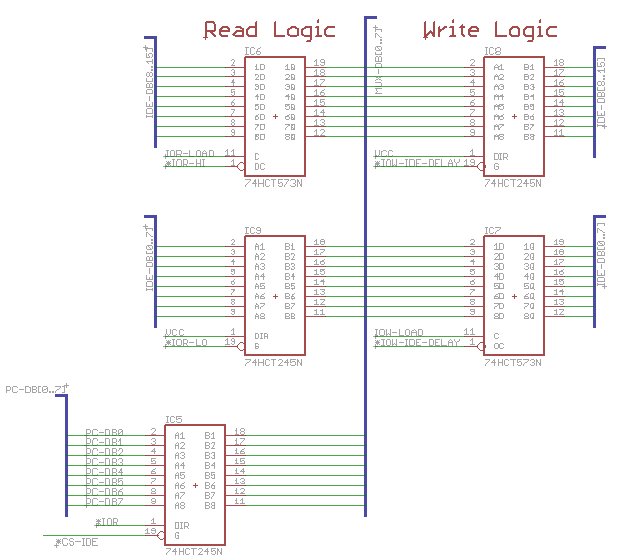 The timing of this process needs some consideration as we need to be sure that data is stored in the appropriate latch before it disappears from the data bus, and secondly that data is presented until just after whatever is receiving it has stored it – this is measured as the data hold time. 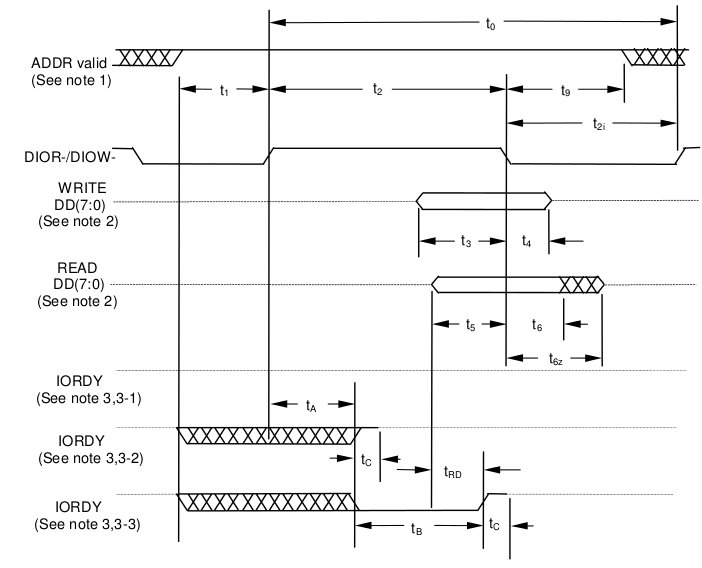 The delays are made by feeding the respective signals through three NOT gates (the control logic already inverts it once) in IC14. The delay can be controlled by the component choice (~15ns with SN74LS04N, or about 25ns with SN74HCT04N). Without the delay lines, for example in the case of a write the latch output would be turned off just as the drive latches the data because of zero hold time – the data may or may not still be valid as the drive stores the data.

In the first version of this board, the write latch load signal is masked unless the request is port 0, which works for the data register but also means no commands can be issued to the drive! Instead, the signal should be masked only when the request is port 1, which can be fixed by modifying the 74HCT02N that will be fitted as IC11 – more details to follow in a build post.

Lo-tech is in no way associated with the sellers of products on other sites linked to on this page (which are provided to provide an example of the types of products available).