The Raspberry Pi uses HDMI for it’s built-in display interface, and it’s well documented that a second screen can be connected to the GPIO header when switched to ‘display parallel interface’ (DPI) mode. The DPI is powered from the Raspberry Pi’s GPU and so has the same performance and capabilities as the HDMI port – 1080p, 24-bit colour, 60Hz.

Project boards exist already to connect a VGA screen to the GPIO, but these are very simple designs and have some limitations such as 6-bit colour and sensitivity to interference from the wireless peripherals in the RPi 3. The RPi GPIO is also stressed by the TTL control signals in the VGA interface and the project boards lack the certifications needed to be offered as finished products.

The Lo-tech Raspberry Pi VGA Board aims to address these problems, providing a true-colour VGA Adapter in a ‘HAT’ PCB format that will provide a reliable VGA output for primary or secondary display purposes whilst protecting the RPi, both from ESD when the screen is connected hot and from over-stressing the GPIO outputs via buffering of the key control signals. 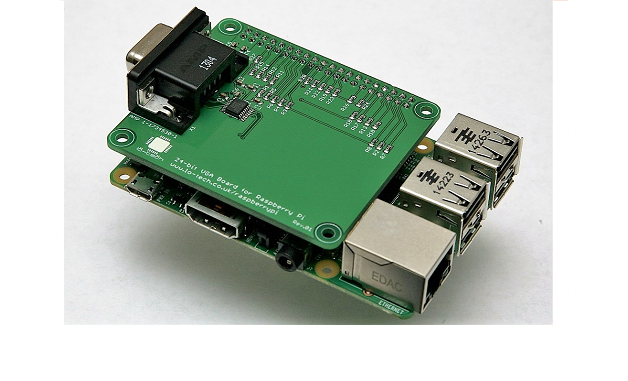 How Much Faster is the New RaspberryPi?

Another new version of the every-popular RaspberryPi has been released, and this time the form factor has stayed the same (as the B+) and it’s the CPU and memory that get the attention: single-core ARM6 is replaced by quad-core ARM7, and the RAM doubled to 1GB. This opens up the platform to Ubuntu and should help stave off some of the competition for a while.

How much faster is it?

The box claims 6x improvement, and of course real-world scores will depend on the workload and being able to keep those four cores busy. But anyway, here are the Geekbench scores I’ve run on the RP1-B+ and the new RP2-B:

1329 puts the new model roughly comparable to something like an Intel Core Duo T2400 (from 2009), adequate for every-day desktop computing in many cases. For me though the board is much more interesting as a network server or embedded application server.

MediaWiki for example is frustrating on the original RaspberryPi, so with an existing Raspbian image updated to work with the new platform (simply ‘sudo apt-get dist-upgrade’ then reboot), I measured response via ‘time wget …’ – the new board is consistently 3x or 4x faster than the older model, providing sub-second response times in many cases (with APC PHP caching enabled). At least for a small wiki, this makes the platform pretty usable.

SD card read performance remains at about 18MB/s for both boards (measured with a SanDisk Ultra 16GB), but iperf network tests show a usable improvement in full-duplex operation – the RP2 managing about 150Mbps total throughput, compared to about 110Mbps on the RP1.

An interesting aside is the power consumption – it’s slightly up on the original B+, but still it peaked at only about 2W during testing. So a RaspberryPi 2 desktop PC should use at least 15W less than even a carefully specified Intel machine, and with Windows 10 bring readied for the new RaspberryPi, this might not be so unrealistic. Given some 10 million office workers in the UK, saving even 15W on each one would add up to 300 GW hours per annum (and about 200,000 tonnes of CO2).

But anyway, to sum up – a great upgrade to an already useful system, having kept both the price and the power consumption about the same. Form factor is identical to the B+, and the GPIO header pinout is also the same. Micro-SD card storage can be a bottleneck, especially for random workloads, but in very simple testing performed here the board is consistently 3x to 4x faster than the original overall.

A new version of the Lo-tech GPIO Interface for the RaspberryPi is due shortly – watch this space!

GPIO Interface Board for Raspberry Pi B+

Posted on September 13, 2014 by james in New Lines, RaspberryPi | Leave a comment

I’m excited to announce the immediately availability of a new PCB, the Lo-tech GPIO Interface Board for Raspberry Pi Model B+! 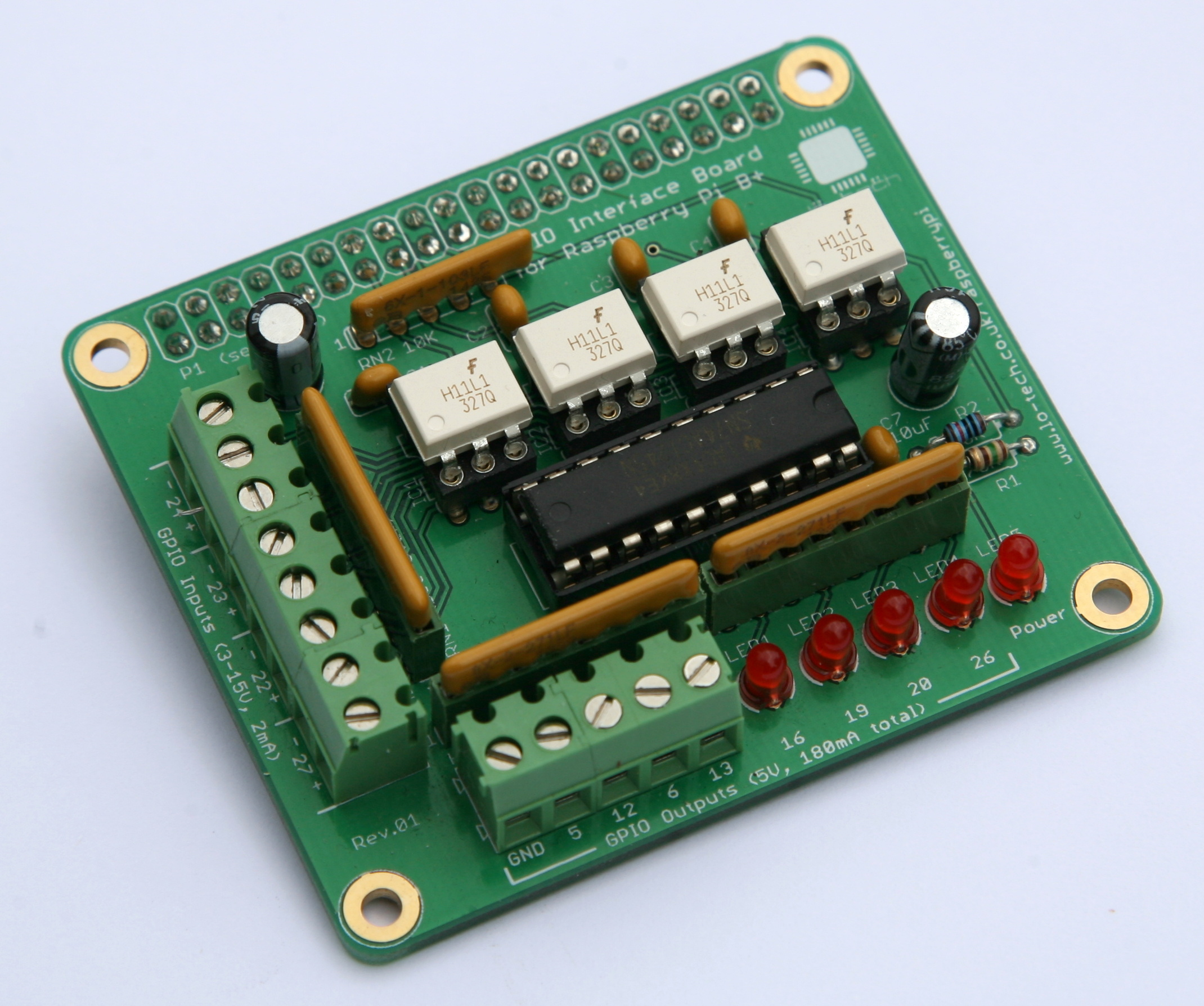 This is the first Lo-tech PCB not targeted at retro computing directly, but the Raspberry Pi is of course an interesting hobby ecosystem in its own right and something that can find a practically unlimited range of use-cases. Looking around for a GPIO interface for the new model, I couldn’t find anything available (OK that was immediately at launch of the new model) and certainly nothing that offers a Radio Shack style build-it-yourself experience, hence why this board now exists.

This board connects directly to the expansion header on the new Mobel B+ Raspberry Pi, and provides 4 opto-isolated inputs and 8 outputs. When powering 8 LEDs and being polled a few times a second, the power consumption of the Raspberry Pi with the board fitted is only around 1-2 Watts, making this combination particularly suitable for embedded applications such as network connecting things around the house for monitoring or alerting.

The board follows the design of the Raspberry Pi B+, making for a tidy installation: 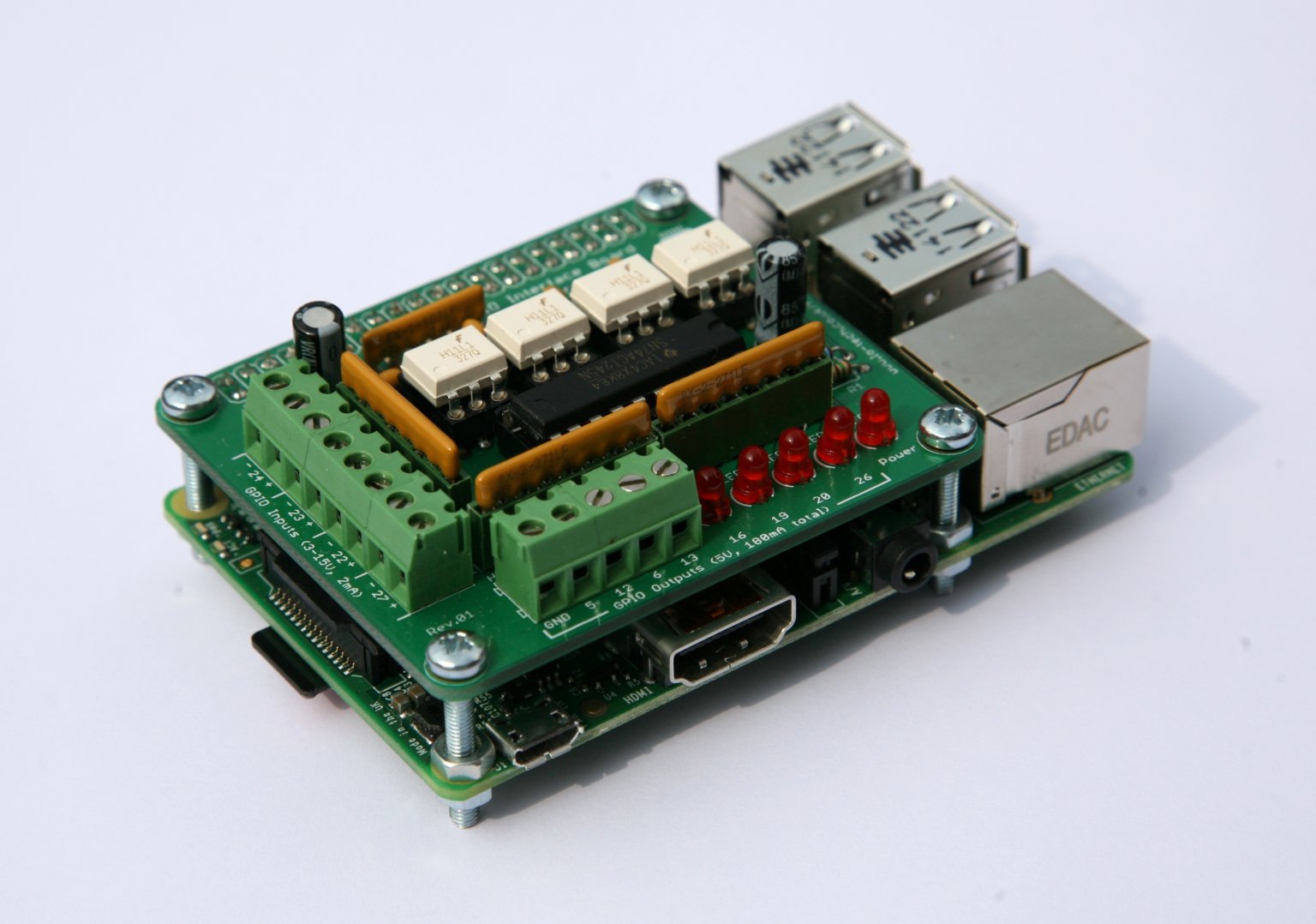 Full technical specifications, schematic, and parts list are available on the wiki page, and PCBs are available in the store now.