From lo-tech.co.uk
Jump to navigation Jump to search 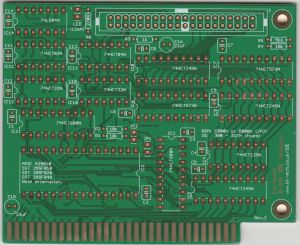 The Lo-tech 8-bit IDE Adapter rev.2 is a bootable storage adapter for IBM PC, PC/XT, PC/AT and compatible hardware - essentially any PC with an ISA slot. The card enables the use of standard IDE (ATA) and SATA hard drives (via a SATA to IDE bridge).

The BIOS ROM on the card enables the host PC to boot from storage presented by the adapter, which appears in DOS as an ordinary fixed disk (i.e. drive C, D, etc). No DOS drivers are needed.

The PCB itself is a through-hole, 8-bit ISA adapter providing a 40-pin IDE header suitable for connection to one or two disk devices. The design goals were:

The board uses the same ATA register mapping as other Lo-tech XT-CF boards and uses the XT-IDE Universal BIOS adapter type 'XT-CF (PIO with BIU Offload)' (XT-CF BIU). Note that currently, a specific BIOS build is used, pending integration of changes back into the XTIDE Universal BIOS source. The BIOS is provided through an in-system re-programmable 32KB flash-based ROM operating at either C800h or D800h (user selectable). Since the BIOS is only 8KB, 24KB is available for other purposes, and is byte-programmable - the board can therefore function as a universal ROM board.

This PCB is available now in the Lo-tech PCB Store.

If only CompactFlash or SD Card storage is required, the Lo-tech ISA CompactFlash Adapter offers equivalent functionality with a lower component count. This board supercedes the Lo-tech 8-bit IDE Adapter.

To program the board, make a DOS boot disk (utilities have been tested on MS-DOS 2.11, 3.3 and 6.22) and add the BIOS binary files and the flash utility from the download. Install the Lo-tech 8-bit IDE Adapter in the machine and boot from the floppy, then flash the ROM thus:

Note that should a board containing the IDE_XTP.BIN image be moved to an Intel 8088/8086 PC, the BIOS image will cause the machine to hang during the POST. To resolve this, either re-flash the board with the IDE_XT.BIN image before moving, or disable the ROM during the POST via JP1. JP1 can be closed once the machine has booted, so enabling the ROM for programming (provided there is no other ROM at the address selected with JP2).

Use of this design is provided subject to the lo-tech.co.uk Terms and Conditions.