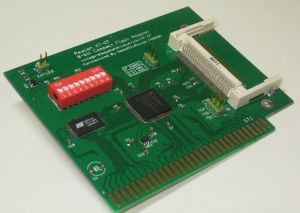 The lo-tech XT-CF Board is a bootable 8-bit ISA card with a CompactFlash header mounted so that the CF card is accessible through a custom ISA expansion slot bracket. This card has been designed for use in IBM PC/XT, PC/AT and all compatible systems.

Note: the current iteration of this card is the XT-CFv3.

The board is derived from the Dangerous Prototypes V2 board, and uses the same Xilinx XC9572XL CPLD.

Operating mode is configured in the BIOS and can be switched on-the-fly between modes using the lo-tech XT-CF Configuration Utility. The board is functionality identical to the XT-CF-lite, and with one jumper-wire fitted can also implement ISA B8 line functionality of the XT-CFv2, allowing use in IBM Personal Computer XT System Board Slot 8. 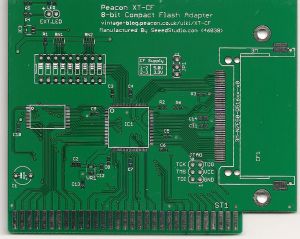 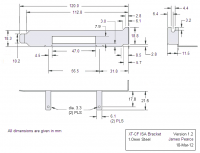 *Switches 6-8 must be OFF. Switch 9 can be left ON, since the flash chip includes Software Data Protection that prevents accidental corruption or overwriting.

**To use the ISA B8 function, wire a jumper from Sw7 resistor-side to ISA B8 pad (see photo).

Note that the IO base address is set within the XTIDE Universal BIOS ROM image via the Universal BIOS Configuration and Flashing utility. The IO address set within that utility must much that configured on the card. Should the IO port address be changed for any reason, the BIOS must be updated and re-flashed to the XT-CF card (using the lo-tech XT-CF flash utility).

The BIOS address is determined at boot time by the XTIDE Universal BIOS. Since the code has been designed to be relocatable, the BIOS base address can be changed without the need to reconfigure the Universal BIOS.